Well my friends, I am dealing with a two-year old bully at Pookah’s daycare.

It all started about a month ago,when the cutest little boy (we’ll call him D) and Pookah had  a head butting incident.

Now at the time, I thought it sounded fishy. Because #1, the school didn’t tell me about it. I found out, of course, from Pookah himself when I noticed the little purple egg forming on his forehead along with a scratch. Pookah told me:” Mommy, D came over and BAM! We bumped heads.”

But hey, they are boys, I reasoned. And I knew that if D was anything like Pookah, then welp!  It would be OK.

But then I started to notice that Pookah didn’t want to have anything to do with D when he got to school.  I once again put it off to Pookah’s aversion to talking to or touching anyone when he first arrives at daycare. He needs to warm up.  Plus, I talk to his mother all the time, and she always says that D is always talking about Pookah.

But Friday, I got a call from the director while I was at work. She just wanted to tell me that Pookah had been hit in the head with a truck while the kids were playing. She reassured me that it was a little cut on his forehead that they had put some neosporin on and that he had a band-aid on.  And that he was alright.

I wasn’t too concerned……

Until I got home and saw my baby’s head. 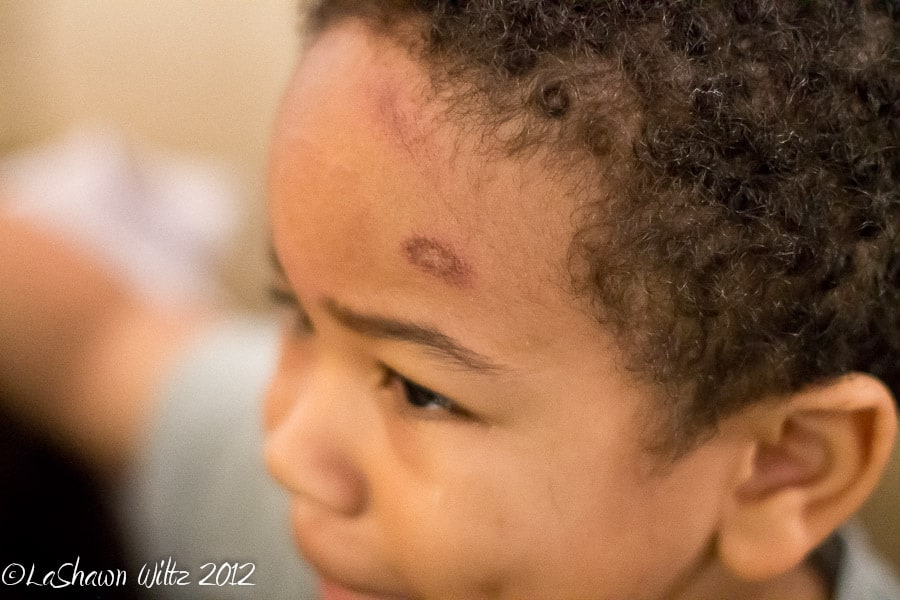 (It actually looked better by the time I could bring myself to take this photo. But still…..)

CHILD!!!! I literally broke down in tears!

CDub was very upset.  He said that when he went to pick Pookah up, one teacher pulled him aside and  told him that D had been having some behavior issues lately. Evidently, he randomly just picked up the truck and just started beating my child over the head with it!

And she says that he’s had other incidents, but none as bad as this one. His behavior  evidently( YOU THINK) has been getting out of control.  They think it has something to do with his father being overseas and his newborn brother.

You don’t understand, I will CUT you about my baby. CUT you!

I have to work Monday, but Tuesday?! Baby, I will be talking to EVERYBODY.  I’ve got a few other issues that have been building up, so yeah, they are about to get an ear full.  I’m so so so upset. My child keeps getting hurt because I taught him to tell the teacher when someone hits him instead of just retaliating like he wants to.  So he’s been doing what Mommy says, and paying for it.

And this really upsets me because when Pookah was having his behavior issues, he was in somebody’s office every time I picked him up. Or he was always in timeout. And they were always asking me if someone was hitting him at home. But D? Everyday, he’s chilling,  making guns with his fingers shooting them at people, or beating Pookah over the head. Da Hell????

Making guns with his fingers at people? ...what?!

I know my kid has behavioral issues as well, but this sounds a bit over the top. Where are the daycare attendants when this D is beating your baby over the head?!

I totally hope you can get some peace about this situation and that your baby doesn't have to deal with this anymore!

Yea something needs to be done STAT!

Goodness this will not be happening on my watch I would be going ape fool on that daycare. My son came home when he first started school with a knot on his forehead after I went fool on them I never had no more problems.

No to the ma'am. I always take the top down approach and I would report this daycare center and let the chips fall where they may. I would then follow up with the center director and demand a conference with the owner, director, and assigned teacher. No toddler should come home like this.

Ughhhhhhh I'm so mad for you!!! Give them hell. It was unacceptable for them not to tell you the first time AND he double standard? If they're going to send one kid to timeout and put him in an office - which I don't agree with like why can't they deal with toddlers without ostracizing and keeping them away from their peers - that's a different issue - sounds like D is the one that needs to be kept away from others for a moment or two. Not cool. Good luck. I'd be foaming at the mouth angry.