I have had a bit of writers block in the last few days.

I put it off to just having a bad week.

But really, it’s because I didn’t feel like I could write about what I really wanted to write about. 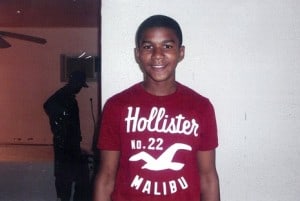 Unless you’ve been living under a rock( and even then…) you’ve heard about this case.

I’ve hesitated in writing about it simply because I was so ANGRY.

And I was afraid that anything I wrote out would be a incoherant, profanity laced post.

But after thinking on this situation and travesty of justice that is happening down in Florida, I realized that I was just as scared as angry.

Because you see, in 15 years or so, this could be MY baby.

My Pookah could be on his way home from the store.

My Pookah could only be armed with a bag of candy.

Some vigilante with a gun could decide that my black child is a threat.

So much of a threat that he would shoot my innocent black boy child without probable cause.

And then hide behind an asinine law while the authorities run around with their thumbs up their asses doing nothing.

Where is the justice?

Where is the justice for Trayvon,his parents and his friends?

Why did the FBI need to get involved?

Why do we need to hold vigils and rallies to get the word out?

Why aren’t the authorities just as disgusted, and horrified and demanding justice like WE are?

Why is this man STILL not arrested? Or charged? Or SOMETHING?

To hear that boy screaming on the 911 tape, to see the anguish and confusion and disbelief that nothing has been done on his parents faces, wondering why?

Why is there no justice?

Why in AMERICA in 2012, is there no justice for Trayvon?

Because this is the America that my son will be growing up in.

This is going to be his reality.

I’m going to have to teach my child that he is STILL not safe in this country because of the color of his skin.  Because there are still individuals out there who think like this.  Individuals who have power and guns.

A week later, I'm still not processing completely. And now they are making him out to be the bad guy. REALLY?

I didn't know about this incident because I don't have TV and don't read the news but now that I know about it I get more warmed up each time I read about it. I am going to my old race relation studies blog to learn more about it and get my thought together, because it is too much, too painful to read about mothers going through such painful incidents. we must raise awareness. this makes me cry and think about what my friend's once said... :(. I am too SAD!!!

Tragically senseless :( I still can't even wrap my mind around the whole ordeal, but I definitely won't stop demanding justice until justice is served and I hope everyone else doesn't let this case "rest" until Zimmerman is serving life or sentenced to death. This makes me terrified for my son and my stepsons. It's my prayer than laws protecting murderers are changed and that this precious child's death results in honest dialog and some social awareness. Too many people are ignorant to the fact that this is still happening! Too many people still label black boys and men as "threats" when they are the main ones in our society being threatened at every turn. :(

sigh..you know how I feel.. Trayvon could of been any of our sons.. It makes me scared for mine..But I won't quit!!

I won't quit either!

It's like you read my mind with this post. Last night I couldn't fall asleep because of this story. I just pray that justice will be served....