I had to give you guys an update on how things are going around here.

Apparently, I'm a mom who spies.

I listened very hard to everyone's advice on Sunday( thank you so much!) and I started thinking about MY child. 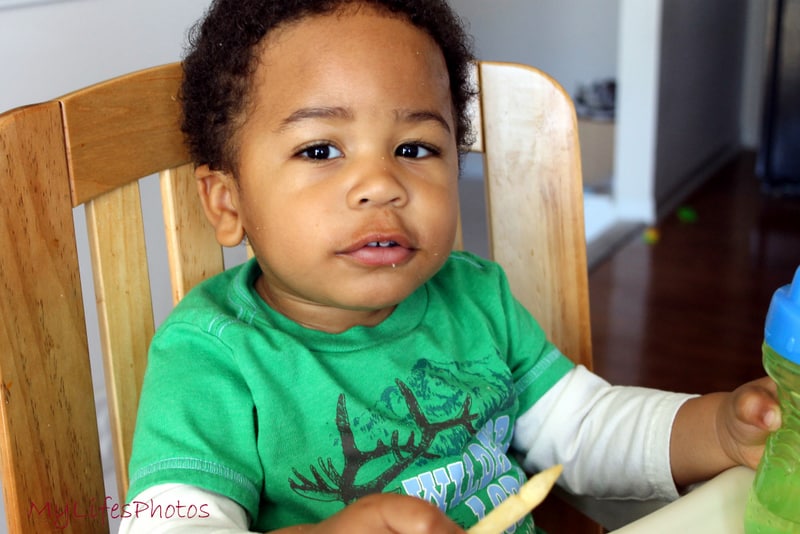 MY Child (excuse the salt crumbs from the fries...)

I kept thinking about this.  I kept thinking about interactions he has had in the past with children.  Biting not withstanding, the incidents are isolated.  But I was curious.  What was REALLY happening at daycare??  So I spied.  And I'm not ashamed to say it!
After some feedback from you guys and friends and my mother( yes we made up)I decided to try something new.  All morning before I dropped Pookah off, I kept reminding him, no hitting and no biting.  It was the last thing I said to him before I led him into the classroom. When I left, I noticed that he was following me to the door.  I stood by the door just to see if he cried.  Nooooo.  What happened next had me reevaluating and thinking.
There is a little girl, Riley who in the past, I noticed, came up to Pookah and always wanted a hug.  But I watched in utter amazement as that little girl came up to Pookah and without a word hit him. I barely restrained myself from rushing into the room to defend my baby.  But I checked myself.  I wanted to see how Pookah handled it.  The words out of his mouth? Nooooo.  Noooo hidding( that's hitting in Pookah speak).  Hmmm. She hits him again. Noooooooo.  And again.  This time, he pushes her hand away. She does that shit AGAIN! Nooooo, no hidding!!! NO NO NO.  By this time, the teacher realized that two of her charges was missing and asked, who was saying no.  Riley moved away and another of Pookah's friends came and they proceeded to play peacefully.  But what really really got me about this whole exchange, was not ONCE did Pookah hit her back.  I could hear the frustration in his voice.  I couldn't see his face, but I could tell he was getting frustrated.  Is this what has been happening to my Pookah every day? Has he been battered and bullied so much in the morning that by the time the afternoon comes( when most of the “incidents” happen) he's tired and just lashes out?  It also showed me that he is actually listening to us! He repeated “no hitting” to Riley several times.  So. He had an OK day.  But now, we have to work on the “no biting.”  He did get someone on the finger, right before I got there.  Maybe I need to pick him up a little earlier.  Theses incidents always happen in the evening.  Too much stimulation? Tired? Hungry?  Hmmm.  I'll be giving this a lot of thought.