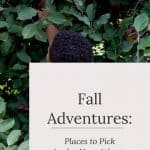 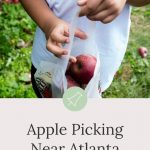 Fall is finally here, which means it is prime time for apple picking! We decided to do some apple picking near Atlanta and spend the day filling bags with fresh, ripe delicious apples.

Apple picking season generally starts in mid-September and lasts throughout October. Depending on where you live the dates can vary some, but usually, when you first start to feel that chill in the air at night, the apples are ready!

There are several places to go apple picking near Atlanta, but I have found the best apples come from apple orchards in North Georgia.

Even though it was a bit of a drive from Atlanta, apple picking in Ellijay Georgia is absolutely worth it. We spent the day at BJ Reece Apple House and Orchards and had so much fun.

Ellijay Georgia is a little more than an hour north of where I live in Atlanta, but it is an easy drive on the interstate. BJ Reece is a working farm that offers apple picking, a petting zoo, a bakery and more.

I woke up Monday with the intention to take Pookah apple picking, but even though my spirit wanted to go, my body was like no.

BUT. Lucky me, I’ve got friends that all wanted to go. So after some peer pressure and compromise, Me, MJ, Aaronica, and Mimi and all the kids, made it to the apple orchard.

Where instead of being breezy and overcast, it was hot and sunny!

But we picked apples.

There were no temper tantrums

And of course, I took photos. Lots of photos.

Now I’m off to make this Gluten-Free Apple Crisp and find some other recipes for these apples.

Did you pick Apples this fall? What are you going to make with your apples?

Five Things I Read Around the Web
Currently: The Back to School Edition
Currently
Click here to cancel reply.

[…] We started off with a trip to the Apple Orchard with friends! […]

[…] started that Monday off with a trip to BJ Reese Farm in the upper part of GA. My girls called me to go and I was sleeping so I missed the apple picking but I did get some apple goodies […]

I LOVE these pictures. We've never been apple picking. I actually looked up apple farms after I saw your stories on Instagram but I didn't map out the distance to each of them yet. Hopefully we'll get around to it this fall!