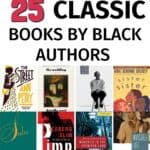 Check out these 25 must read classic books by black authors ( fiction, non fiction and poetry) that everyone should add to their reading lists.

This blog post contains affiliate links. Everyday Eyecandy is a participant in the Amazon Services LLC Associates Program, an affiliate advertising program designed to provide a means for sites to earn advertising fees by advertising and linking to Amazon.com.

I find that every year during Black History Month, there is a proliferation of lists about the “best black___this that you should ____” during black history month.

BUT black voices should be celebrated every month, all year round without being limited to 28 days.

One of the best ways to do this is through literature. It’s where we tell our stories, our history and our struggles and share our joy.

I defined classic as anything before the year 2000. Broad yes, but I wanted to include a full range of stories that show a huge range of black stories from despair, to showcasing the downtrodden to uplifting and hopeful to straight entertainment.

Because they are not just BLACK stories, they are the stories of PEOPLE.

And each and every one of them is a must read.

I’ve read about 90% of this list at least once and that 10% is on my list for this month. Along with re-reading some that I haven’t touched since high school and college.

Hopefully, you can find something that you enjoy or learn from or can’t stop thinking about on this list.

Their Eyes Were Watching God By Zora Neale Hurston

THis classic was originally published in 1937. But it was out of print for almost thirty years--due largely to initial audiences' rejection of its strong black female protagonist. re-issued in 1978 it has become one of the most widely read novels in African_American Literature. --

"The book's nameless narrator describes growing up in a black community in the South, attending a Negro college from which he is expelled, moving to New York and becoming the chief spokesman of the Harlem branch of "the Brotherhood", before retreating amid violence and confusion to the basement lair of the Invisible Man he imagines himself to be.  "

The Autobiography of Malcolm X (As Told to Alex Haley)

In this autobiographical novel, as told to Alex haley, we learn how Malcolm X became one of the most influential figures of the 20th Century. Read as he tells of his journey from a prison cell to Mecca, following along with his transition from hoodlum to Muslim minister. A MUST READ.

Pimp: The Story of My Life By Iceberg Slim

Iceberg Slim's autobiographical novel was shocking when it was sent published in 1969. The book , groundbreaking at the time it was published, offers readers an unforgettable look at Chicago's street life during the 1940s, 50s, and 60s. In the preface, Slim says it best, "In this book, I will take you, the reader, with me into the secret inner world of the pimp."

Go Tell It on the Mountain (Vintage International)

In one of the greatest American classics, Baldwin chronicles a fourteen-year-old boy's discovery of the terms of his identity. Baldwin's rendering of his protagonist's spiritual, sexual, and moral struggle of self-invention opened new possibilities in the American language and in the way Americans understand themselves.

A Raisin in the Sun By Lorraine Hansberry

Lorraine Hansberry's award-winning drama about the hopes and aspirations of a struggling, working-class family living on the South Side of Chicago

Manchild in the Promised Land By Claude Brown

"this thinly fictionalized account of Claude Brown’s childhood as a hardened, streetwise criminal trying to survive the toughest streets of Harlem has been heralded as the definitive account of everyday life for the first generation of African Americans raised in the Northern ghettos of the 1940s and 1950s."

I Know Why the Caged Bird Sings By Maya Angelou

I Know Why the Caged Bird Sings captures the longing of lonely children, the brute insult of bigotry, and the wonder of words that can make the world right. Maya Angelou’s debut memoir is a modern American classic beloved worldwide.

Octavia Butler's most popular novel, Kindred follows Dana in 1976 who is abruptly transported to the antebellum South. Rufus, the white son of a plantation owner, is drowning, and Dana has been summoned to save him. Soon, Dana is drawn back repeatedly and each time she stays grows longer and more dangerous until it is uncertain whether the danger she faces in the past will affect her future.

The Collected Poems of Langston Hughes

A Collection of all the poems that Langston Hughes published during his lifetime, arranged in the general order in which he wrote them.

Jubilee tells the true story of Vyry, the child of a white plantation owner and his black mistress.

The Street By Ann Petry

The Street , set in 1940s Harlem, follows Lutie Johnson, a newly single mother , and her efforts to get her part of the American Dream for herself and her son. It's a great perspective on the realities and challenges of black ,female, working -class life.

Two girls who grow up to become women. Two friends who become something worse than enemies. In this brilliantly imagined novel, Toni Morrison tells the story of Nel Wright and Sula Peace, who meet as children in the small town of Medallion, Ohio.

Ain't I a Woman: Black Women and Feminism By bell hooks

"Ain't I a Woman has become a must-read for all those interested in the nature of black womanhood. Examining the impact of sexism on black women during slavery, the devaluation of black womanhood, black male sexism, racism among feminists, and the black woman's involvement with feminism, hooks attempts to move us beyond racist and sexist assumptions."

The Color Purple: A Novel By Alice Walker

Winner of the Pulitzer Prize and the National Book Award. and subject of an iconic film staring Oprah Winfrey, The Color Purple depicts the lives of African American women in early twentieth-century rural Georgia. A CLASSIC.

The Women of Brewster Place  By Gloria Naylor

In her first Novel, Gloria Naylor weaves together the stories of seven women living in Brewster Place, a bleak-inner city sanctuary, creating a powerful, moving portrait of the strengths, struggles, and hopes of black women in America. Made into a Mini Series by Oprah Winfrey

This is a modern classic, a book that deals with the impossibly difficult themes of race in America, set during the Civil Rights Movement of the 1950s and 60s.

this Classic gritty urban love story from Best Selling author Terry McMillan follows the story of Franklin and Zora as they move from Scrabble to sex, from layoffs to the limits of faith and trust.

I was way too young to read this when I did LOL.

The first novel by Walter Mosley, featuring Easy Rawlins, the most iconic African American detective in all of fiction. Named one of the "best 100 mystery novels of all time" by the Mystery Writers of America.

I read this the summer of 1995 and passed it around to all of the girls in my dorm that fall.

It's an urban classic novel about about Tracey Ellison, a young woman coming of age in the late 1980s, living life as fast as she can. Motivated by the material world, she and her friends love and leave the young men who will do anything to get next to them. 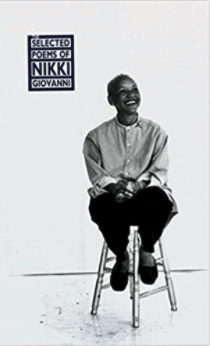 This is the first compilation of Nikki Giovanni's poetry. 150 poems all presented in chronological order .

"A remarkable first novel by a young, gay, black author who fashioned a deeply moving and compelling coming of age story out of the highly controversial issues of bisexuality and AIDS."

Makes Me Wanna Holler: A Young Black Man in America By Nathan McCall

An honest look at the perils of perils of growing up a black male in urban America", Washington Post reporter Nathan McCall tells the story of his passage from the street and the prison yard to the newsroom of one of The Washington Post.

The Wedding: A Novel By Dorothy West

The Final novel from Harlem Renaissance writer Dorothy West, offers an intimate glimpse into African American middle class.  Set on Martha’s Vineyard in the 1950s, The Wedding tells the story of life in the Oval, a proud, insular community made up of the best and brightest of the East Coast’s black bourgeoisie. 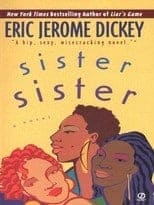 Sister Sister is the debut novel of the Late New York Times bestselling author Eric Jerome Dickey Essence has called it one of the “50 Most Impactful Black Books Of The Last 50 Years”.

More Lists of Books By Black Authors to Consider

5 Ways to Read For Free While Social Distancing
Books I Read This Month: January
It Starts With Us: A Book Review
Click here to cancel reply.